My gorgeous nephew has just turned 1. My super talented mum and I were asked to make his 1st birthday cake… and it was to be a Hoot cake. Mum and I put our thinking caps on, did some research and came up with a design and a plan of attack. We decided on one large cake and then lots of little cup ckes with Hoot cake toppers. 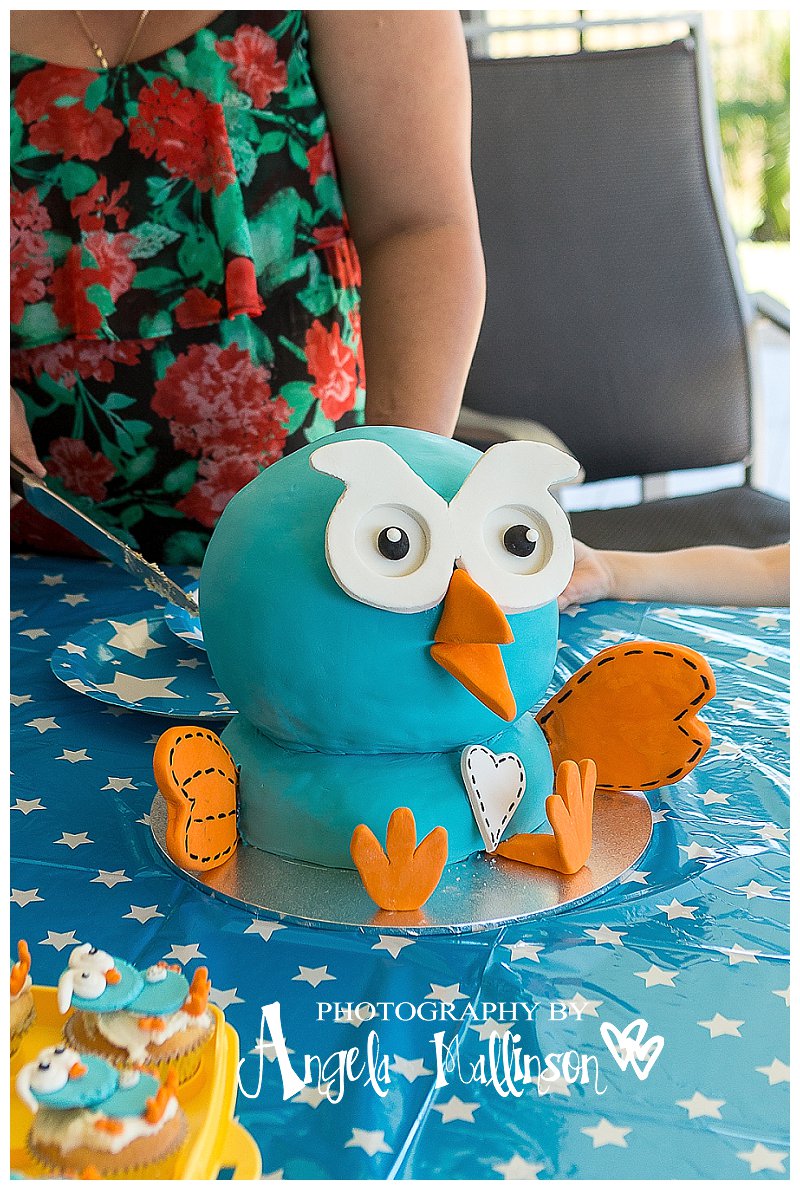 Hoot’s head is significantly larger than his body, so we decided on 3 8 inch round cakes for his head, and one for his body. Of course he would also have his trademark wings and feet.

So, using a double batch buttercake recipe, we made the cakes and once cool, froze them. Frozen cakes are so much easier to carve or shape as they don’t crumble as much or break up.

His body and head were then covered in 2 layers of white ganach. The ganache needs to cover the cake, with the first layer filling in all of the gaps and inperfections. After each layer was used, a dry hot knife was used to smooth the ganach. This smoothing is really important to make sure that the top layer of fondant is smooth.

Next we placed some wooden dowel into his body and cut it so that it was flush with the top of his body. This was to give his body some support and make sure the weight of his head didn’t squash the body.

When we were rolling out the remaining fondant for his head, we thought that we didn’t have enough, so a great trick is to add a blob of fondant to the centre of your coloured fondant and roll it out. This saves you having to colour more fondant and trying to match colours.

We placed the head on top of the body and covered it. Next time, and if we are making another cake like this, we will cover the head separately and then place it on the body. This would have made the neck nice and neat. One thing that we didn’t anticipate was the icing stretching as we draped it over his head. When we cut the cake, we found that over the top of the head the icing was quite thin. So when covering something round, there is no need to roll it as big, it will stretch a little. We ended up cutting quite a bit of fondant off.

His feet were made with orange fondant and CMC to make them hard. To shape them we rolled them and then flattened the feet. The 3 toes were cut using a pair of scissors and then gently shaped.

The wings were shaped out of the orange fondant and CMC to make them hard. I also put toothpicks in them before they dried, so that they could be pushed into the body. I also shaped the wings slightly where they joined the body, just so that would sit nicely. I painted the stitching detail on his wings using some black colouring mixed with some alcohol (to help it dry).

His beak was again shaped out of the orange fondant and CMC. The top and bottom were also secured to the head with toothpicks.

His heart was made out of the white fondant with CMC using a heart shaped biscuit cutter. I also painted the stitching detail on it.

To make his eyes, I found a colouring in picture of Hoot online and enlarged it until I thought that it was big enough for his face. I cut it out using a sharp knife and then smoothed the edges. I added extra CMC to his eyes as I didn’t want them to break. For the centres of the eyes, I cut circles from biscuit cutters, added 2 black eyeballs and then 2 little white balls for detail. These were then stuck behind the large white piece and left to dry.

We didn’t put the wings or the eyes and beak on until just before we were ready to cut it. I was a little worried about them getting knocked off. But in the end, they lasted. We did mix some CMC and water to make a glue. The eyes rested slightly on the beak, but I did stick them to the head as well.

These little guys were quite easy to make (though a little fiddly). I used circle cutters to cut the head and body from blue fondant mixed with CMC. The heads were 2 sizes larger then the body. To make the eyes, I rolled little strips of white fondant and CMC then rolled around to make each eyebrow.

Detail in the eyes was made from a blob of white, with smaller blobs of black and white placed on top. I used glue made of fondant mixed with a little water to form a paste. To make the beaks, I shaped little blobs of orange fondant and CMC into a blob with a flat end. Then using a pair of nail scissors, I cut little nicks into the blob and shaped them into little points.

To make his feet, I did the exact same things as the big feet, only using much smaller pieces of orange fondant.
His wings were made using a mini heart plunger biscuit cutter and orange fondant. I also cut the hearts for his body out of the white fondant using the next size smaller cutter (I purchased a set of heart plunger cutters off ebay a while back). Again I painted on the stitching using black colouring mixed with some rum.

The head was stuck on top of the body, then the eyes, beak and hearts were stuck on. The wings and beaks were left until putting them onto the cupcakes, as they went behind the body. And voila!!! Our Hoot 3D cake and cupcake toppers were finished. And wow did they taste great!

My financial new year’s resolution is to spend less and blog more….. I think I will start with the blogging! I met this family a few weeks back and these little boys stole my heart. 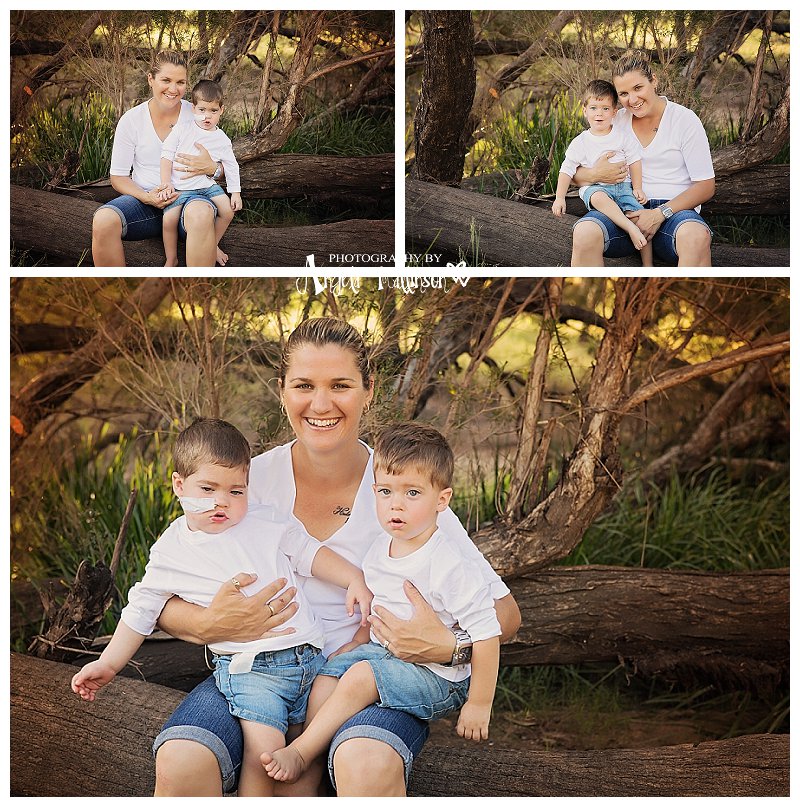 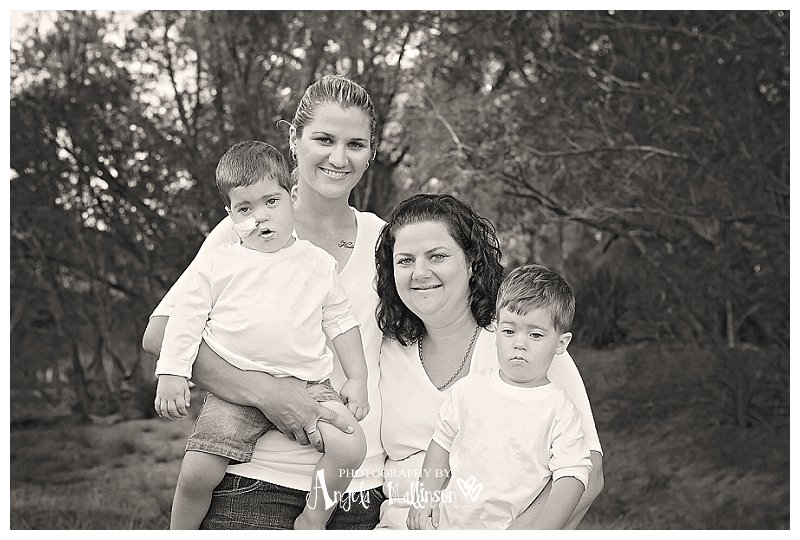